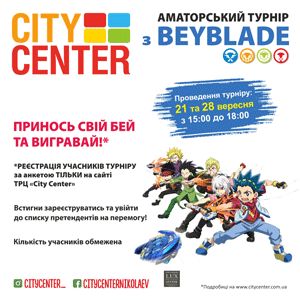 Unique and super mega popular kind of children's entertainment, which is no longer local, but actually worldwide.

Beyblade tournaments are held not only in our country, but all over the world. We also want to present you an amateur kind of Bayblade tournament, which will be held on September 21 and 28.

On these 2 Saturdays, the central Atrium of the City Center Shopping and Entertainment Center will become the epicenter of attention and a "mecca" for all lovers of this beautiful art – the art of a real blader.

Time of the event:

How to earn basic points in fight:

Participants, who have passed registration, will be included in the group A or B according to the filled in form by the participant.

For the age group from 5 to 9 years old, there must be one accompanying person with a Blader.

Only those Bladers who are registered ONLINE on the website of the City Center will take part.

The same Blader is not allowed to register simultaneously in 2 age categories.

There is no additional registrations during the tournament.

Online registration of participants will take place from September 10 to 17, 2019 according to a fully completed application form.

Applications sent before September 10 and after September 17 will not be taken into account.

Application form for registration: click on the link. The completed application form should be sent to the following e-mail address: citybeytour19@gmail.com

A tournament for the coolest Bladers who know how to win!

Register in time and enter the list of contenders to win!

The number of participants is limited

The organizers are City Center Shopping Center and LUX EVENT CENTER agency reserve the right to change the conditions of the tournament at their discretion.

Announcement of the results of registration of participants on the website of the City Center shopping center on September 19, 2019.